I’ve been trying out a new approach for helping students debug their Abstract Syntax Trees in the Compiler Design and Implementation class where I’m a TA. The compiler they’re building is for a subset of C89 and the first two assignments are flex and bison which culminate in an AST for their compiler to perform the compilation. A method for visualizing the graph goes a long way in identifying where you have incorrect rules in flex or bison or the supporting code used to construct the tree from a simple program. I recalled that GraphViz had a simple language for representing a graph so I decided to try it out.

I favor MacPorts and was happy to see that there’s an installer available for GraphViz as well as its GUI. The following was taken from the graphviz.org install page:

DOT is a text based graph representation. Each of the nodes has an entry where you can configure its shape and label when rendering. I kept the format really simple by using the default shape and the node type for the the label. In a few cases, I modified the label for something like an operator.

Generate a PNG from this snippet using the dot command line like so:

-Tpng tells DOT to set the type of the output file to PNG. There are a number of other formats supported, see their docs.

The first line tells the DOT program what type of graph to produce. I’m using a directed graph so the edges will have arrows on them.

The nodes are defined with an id and then their attributes withing the square brackets. If there isn’t a label for the node then it’ll use the id of the node for the label. I’ve created two nodes here node1 and node2 and applied labels to them.

The last bit is connecting the nodes. I have node1 pointing to node2.

The first step is determining how to name the nodes. The only requirement here is for our nodes to have unique names. Since the parser is written in C, the easiest thing to do is to use the struct node * as the identifier. Thus, where I have node1, node2, etc in the Hello World example, I’ll use a simple printf and “node%p” in order to produce a unique name for the node.

The resulting formalized version source (the parser fully specifies the types and adds some clarifying parens.

The resulting graph and DOT file: 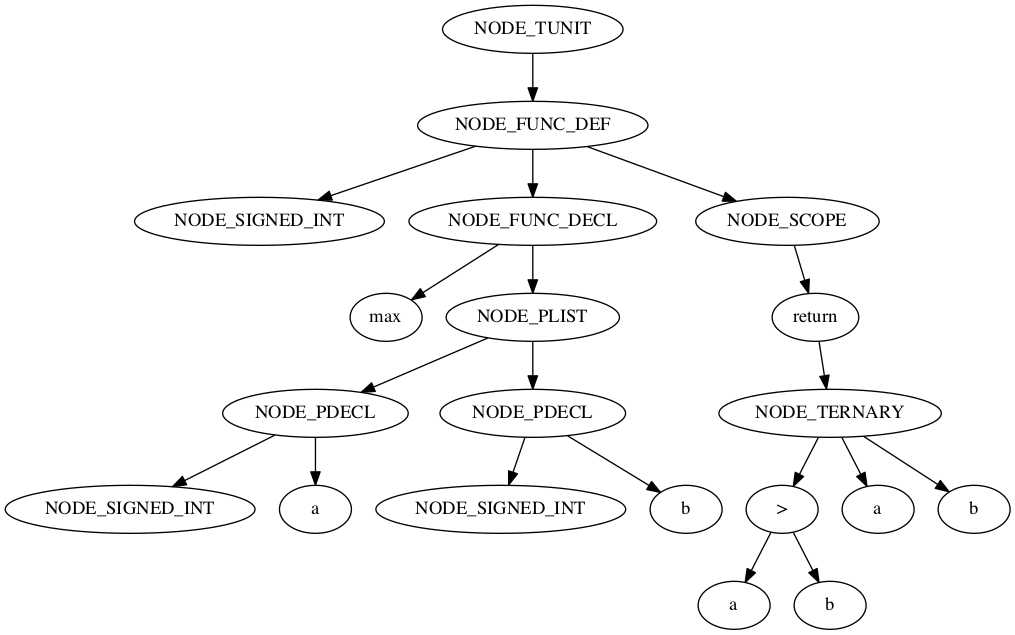 How to read the graph:

Start from the top and move down and to the left. Here’s a traversal step by step:

The above is the result of a couple of hours of playing with DOT and producing an alternate format for the AST. One obvious next step would be to improve the DOT file to include labels for the edges between nodes to better explain their relationships. For example, the function declaration’s label to its identifier could be labeled “name” and the ternary’s labels to its children could be “test”, “iftrue”, “iffalse”.

Check out the gallery in GraphViz, there’s a ton of formatting options!

Next
Use Java8 Time Instead Of Jaxb Gregorian ⏩